It had been a long time since I’d been at an adoption event at PetSmart.

Back when I used to work with MGHS, I actually worked with MGHS. Adoption coordinators were paid to set up cages, help educate and fill out adoption paperwork, care for cats, etc all day Saturday and half a day Sunday. It wasn’t glamorous pay, but it was something to make up for the physical exhaustion and the fact that you pretty much couldn’t do anything else with your weekend.

For awhile, it was myself and another adoption coordinator trading off every other weekend. Our senior coordinator, actually an unpaid volunteer, helped with transport and filling in as needed. As you can imagine, doing every other weekend like this and having little to no weekends per month was a little draining and I had no social life, but there were advantages.

For one, I have learned so much about caring for cats than I’d ever thought possible. When you care for and foster cats of various stages of life, you become familiar with a lot of ailments that you may never become exposed to, from cancer, kidney disease, heart disease, hyperthyroid, nerve damage, you name it.

Secondly,  there are many  times when it’s dead in the store. People come to look at cats but have no interest in adopting, say maybe they’ll come back but you know they won’t. It can get very discouraging. You have these wonderful animals, some who really don’t show well trapped in a noisy store, and you see them come up weekend after weekend after still not being adopted. But then they are adopted. That feeling of seeing them go to a good home, and the adopter is thanking you, but no, you’re thanking them, and you feel so relieved, you’re thanking each other, you and the other adoption coordinators are giving this kitty so many goodbye kisses that kitty probably wants to swat your face. It’s pure joy that this cat who has deserved a home for so long, finally gets one…

… that feeling makes it so worth it.

When I began graduate school, I had to drop to 1 weekend a month or every other month, and we supplemented with another paid adoption coordinator. Eventually, MGHS couldn’t afford to keep paying. A big reason for this was that adoptions just weren’t sustainable anymore. What was once 3-4 a weekend, at one time I even did 12, would be 1 adoption an entire weekend if we were lucky. Obviously, the adoption coordinators felt that 1 adoption was still better than none, and we certainly weren’t going to approve an adopter we didn’t feel comfortable with simply to keep numbers going. However, from a business perspective, MGHS just couldn’t afford to pay people to do it.

I stayed on as an unpaid volunteer, and we moved to unpaid weekends every other month between 1-3 of us until politics within MGHS beyond our control limited my interaction with the organization.

I still help at adoption events, but they’re very rare now depending on who needs them and what cats are available. Also, there is still the situation of being in graduate school, where weekends are my chance to catch up on sleep and study. The whole point of this post is, we were at an adoption event in March, and hadn’t been back since December.

Very surprisingly, people in the store and visitors to the store noticed. Employees and customers said hello, it’s been awhile, etc. It reminded me that when we’d come every weekend, previous adopters would stop by to give updates on how their cats were doing. As a matter of fact, one adopter did stop by to tell us how Sugar & Spice, two cats adopted as kittens from us about 2 years ago, were doing.

We only had 4 cats this time, all adults. My heart went out to one cat in particular. His name is Alex, and he’s 11 years old. 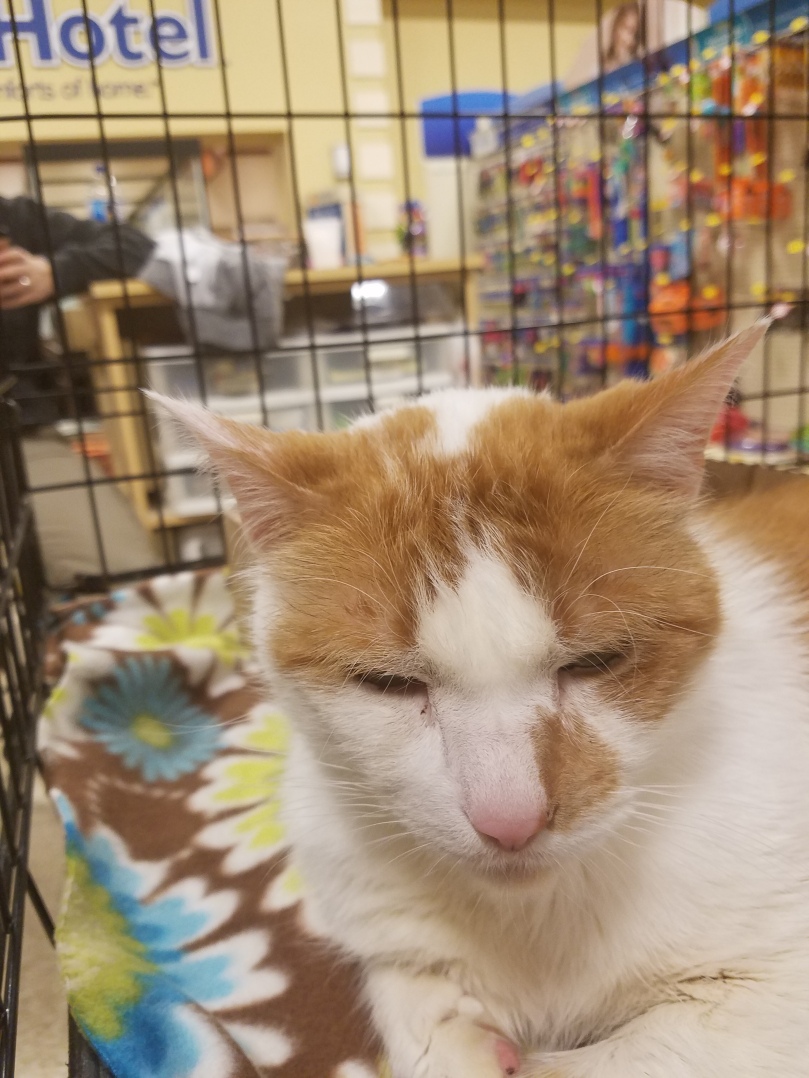 His family was moving somewhere that didn’t allow cats, so they dumped him off at the Animal Hospital. At 11, his kidney levels are slightly elevated. Not enough that he has kidney disease or require sub-q fluids, but enough that he’ll need a special diet the way Patches did. Poor guy. He needed a brushing, as his coat was dull and he was shedding all over the place. He wanted out of the cage, but didn’t want to sit in your lap. Guy wanted to be on the floor of the store wandering around, which we couldn’t have.

My heart goes out to Senior cats, who have to compete with kittens. My heart particularly goes out to them when they’ve been in a cozy home their whole lives, and don’t understand at such an old age, why they’re now in a cage somewhere else.