Can cats tell if you’re pregnant? My husband didn’t seem to think so, but I believe they had some idea. Even before physical indications, like when my belly began growing, or after we turned the guest room into a nursery, I think they could tell. Cats know our smell, and I can only imagine the smell of my hormones changed. Not only that, but having had a particularly difficult first trimester, my behavioral and emotional changes that were out of the ordinary probably alerted them that some change is coming.

Bitey lying on my belly around 12 weeks, when I barely had a bump.

It’s important to prepare the kitties for the introduction of a new family member, whether it’s another pet or a baby. In the first trimester, before there was a nursery or any baby items purchased, we bought a baby gate.

It may be different in your home, but in mine, our cats are allowed everywhere. Besides the occasional closed bathroom door for privacy, or when fosters are in seclusion, the doors in our homes are never closed to the cats. One thing we’ve learned as a result is that our cats feel like they absolutely have to get into a room behind a closed door. Not because they really care what’s behind it, but because it’s closed. When we leave a room with a closed door, we’ll see an audience of cats waiting on the other side, hoping to sneak into the closed off room. Once you open the door and allow them inside, they immediately become bored and lose interest, often wandering back out of the room.

With the baby gate, we wanted to get the cats used to the idea that there may be a room that they can’t always enter, and that’s okay. When we first put the gate up, it was like a puzzle to be cracked, to figure out how to enter the room. Clue, as sleek as she is, was able to simply walk through the bars. We tried to stop this by lining the bottom of the gate with cardboard, so that the space between the bars were filled. Rook was able to leap over the gate. To combat this, my husband lifted the gate higher and put something under it to make it harder to jump over. 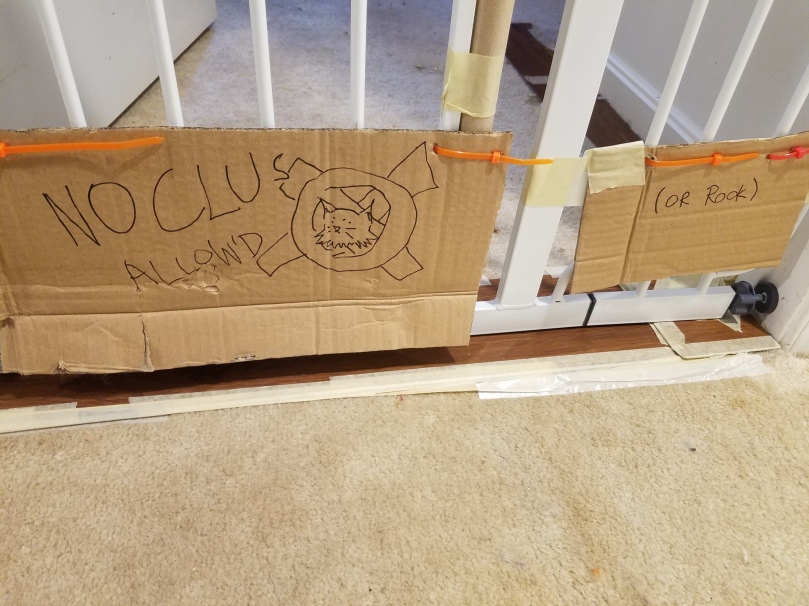 The presence of the gate lost its appeal, just as we’d hoped. That is, until we began working on the nursery in the second trimester. Our guest room had been furnished with items that we’d had for a long time, familiar and completely imbued with the smells of our cats. Everything, even the carpet (in her last year of life, Patches had stained and consistently peed on it) was removed and replaced with all new, unfamiliar furniture.

Yet again, the cats wanted over the baby gates to explore the room. Following our baby shower and the addition of yet more unfamiliar products, our cats wanted to investigate everything.

My mom freaked out about this. I’d get insistent messages about preventing the animals from touching anything for fear of getting hair or germs on it. However, my husband and I felt it was really important that the cats become used to all of the new things popping up in their home, so that they’d grow accustomed to them by the time the baby comes. We allowed the cats to enter the nursery before the baby’s arrival and interact with her items.

When my daughter finally arrived, we washed all the sheets and covers so that it wasn’t, in fact, covered in fur. After giving birth to my daughter, my husband brought small items home from the hospital, like her tiny hat, so that the cats could smell the new human smell before meeting her. Although the cats finally had to meet and get used to my daughter herself, the items themselves were at least familiar pieces in the home.