If you’re a first time mom like me, you’ll be bombarded with comments like “you’re in for some surprises,” or “being a mom is a whole new experience,” or my favorite (read: least favorite): “taking care of a baby is completely different from taking care of cats.” Maybe if you’ve never raised neonatal kittens…

At the time of writing this, my daughter is 8 weeks old. Since her birth, I readily admit that we’ve put in a lot of love and work, and lost some sleep and personal time. As far as being a whole new experience, well duh. I’ve never had a child before. She will grow up and turn into an adult that will have to become independent, while a cat will live with me for 15+ years and permanently rely on me to feed and shelter it. If I had to open up a college savings account for every cat I adopted, I sure wouldn’t have 5 now.

For starters, temperature regulation and monitoring for signs of illness are important in both human and feline babies. Both are born with a vulnerability and new immune system. I’ve seen newborn kittens who were healthy one day, and within hours take a turn for the worse.

A newborn kitten sleeps most of the day, with regular feedings every 2 hours. Even if the newborn is sleeping and difficult to wake, it’s critical to wake them up anyway and get them to eat, otherwise they can become lethargic and decline quickly. This is the case for both human and feline. If the kitten is without its mother, you need to mix the formula and feed by bottle. Not mixing formula properly, or not feeding according to a proper dosage can lead to constipation or diarrhea, just like with infants.

Side by side: baby formula and newborn kitten formula. Uh, don’t get these two mixed up…

Moreover, both species of babies need to learn how to use a bottle, and it can require patience sometimes when they struggle to latch on. If too much air is sucked in with the bottle, newborn kittens will also get gassy and cry from discomfort. Products like Mylicon will also work on kittens suffering from tummy upset.

While human babies can poop on their own, newborn kittens can’t, and need to be stimulated to go. So while we’re not changing diapers, we’re still checking poop status after feeds. 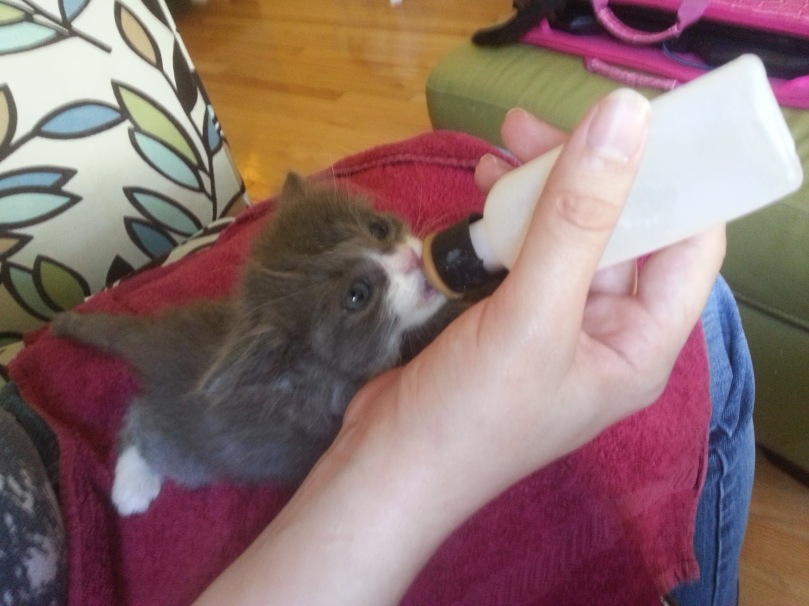 Bottle feeding Clue when she was a baby

I’ve done bottle feeds a few times, so I already knew what it would be like when my daughter arrived. You think to yourself, okay, feed, poop, sleep two hours. Not so much. By the time you’ve woken them up, fed them, depooped them, made sure they’re comfortable and return to sleep, it’s more like you have 20-30 minutes until you have to wake up again for the next feeding. The alarm setting, or trying to wake up from sleep through the cries. Yup, experienced that before. The biggest difference, especially since I’m breastfeeding, is not being able to hand my daughter off to another foster/volunteer so I can catch some sleep. It makes a huge difference when bottle feeding kittens to be able to trade off with another person. Not as simple to hand off my daughter, so alas it was a rough first few weeks before she started sleeping a little longer between feeds.

Steady weight gain is another important factor in both species. Babies grow at a fast rate, and no gain or even loss can be signs of trouble. Because of this, we usually keep a chart that monitors their weight, and weigh them at least once a day if not twice. Keeping track of bowel movements and pee are also part of this, taking these into account when tracking weight and making sure they’re eating enough and staying hydrated. If they’re dehydrated, you can add pedialyte to kitten formula the way you might for an infant.

For teeny tiny kittens, you might use a kitchen scale to weigh them. Once they’re older, you’ll use a baby scale. Yup, the very same scale we’ve used to weigh our cats, we began using for our daughter. 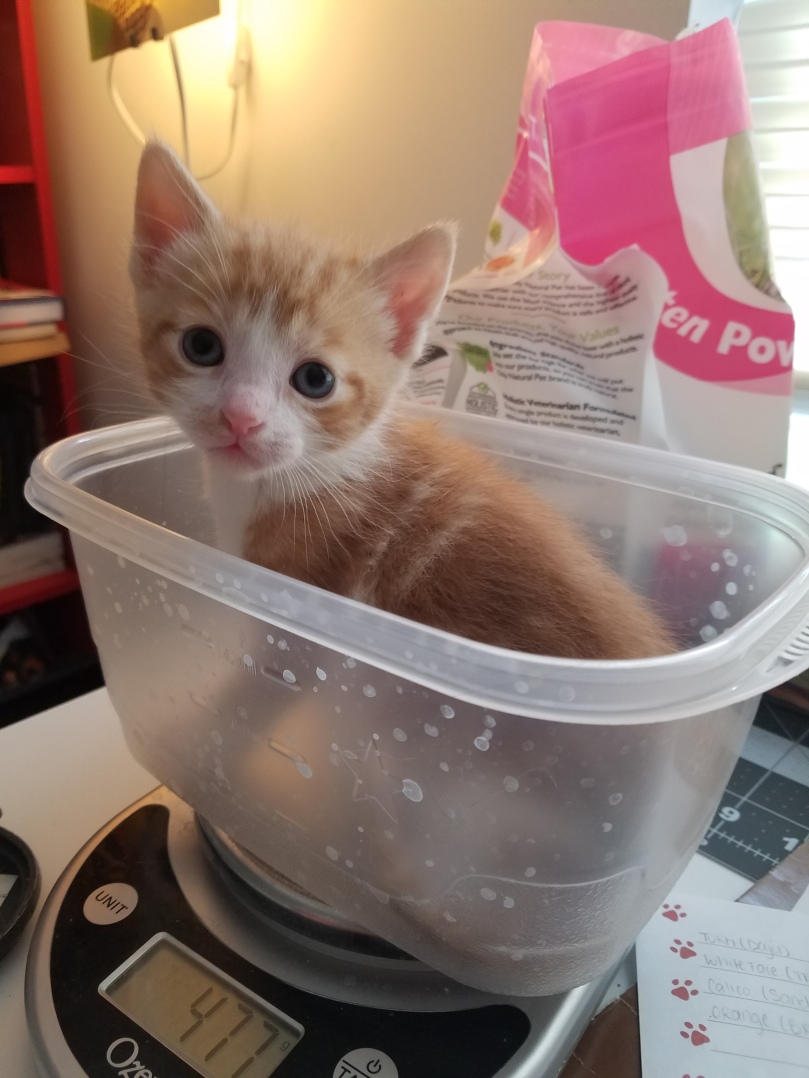 Weighing Briar on a food scale 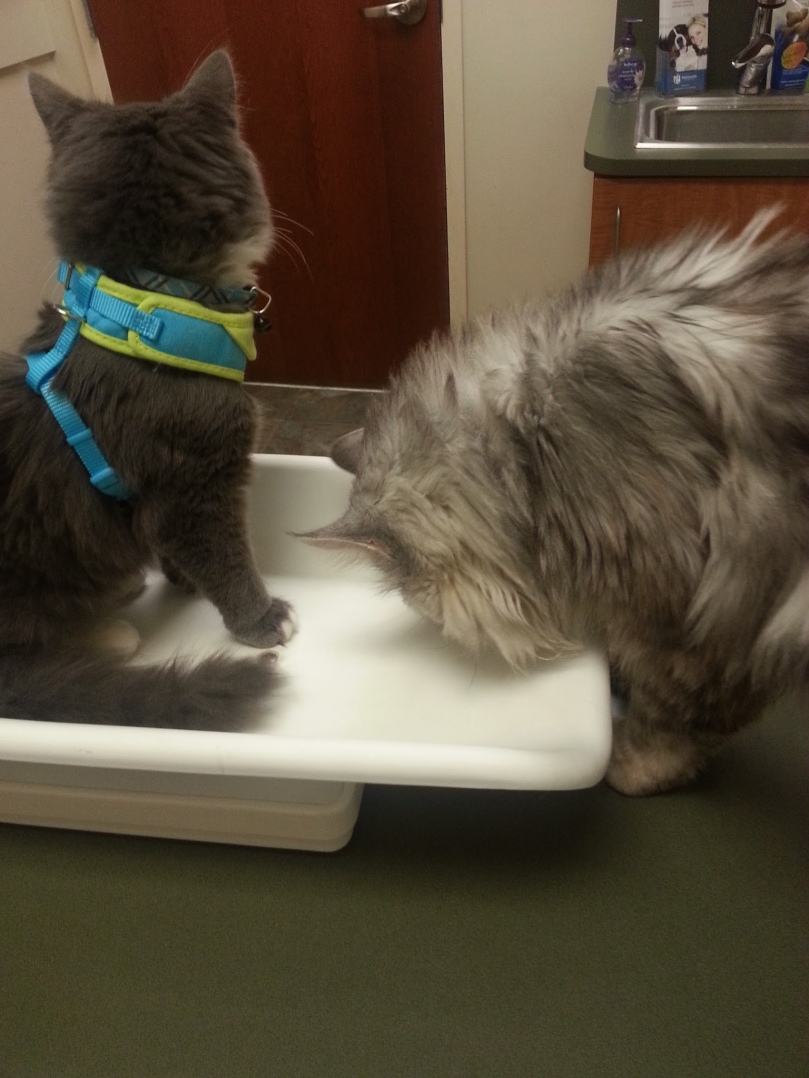 Clue and Frosty Dragon being weighed on the scale at the vet.

You know you have babies, human or not, when you get excited about poop. Not just that they pooped, but what color it is, and whether or not they pooped all by themselves.

Pooping, in all species of babies, will tell us if they’re eating enough, what they’re eating, if they’re sick, or what stage in development they’re in. While diaper blowouts might be new to me, I’ve had to clean kittens covered head to toe in their poop. I’ve praised kittens for learning to poop in a litterbox. I’m sure I’ll be praising my daughter when she learns to use the potty.

In summary, between experience raising newborn kittens and reading up on human infant care on the internet, nothing has surprised me thus far. Projectile vomiting? As of a week ago I can say I’ve experienced it with both an infant and a cat. Crying, feeding, pooping, while none of it is particularly pleasant, I’ve seen it all. That being said, we all seem to love babies and cherish times that they’re awake and bonding with you. Those tender moments when babies are sated, clean, and peacefully sleeping, they pull at your heartstrings and make you want to take 1000000 photos on your phone no matter what species they are. 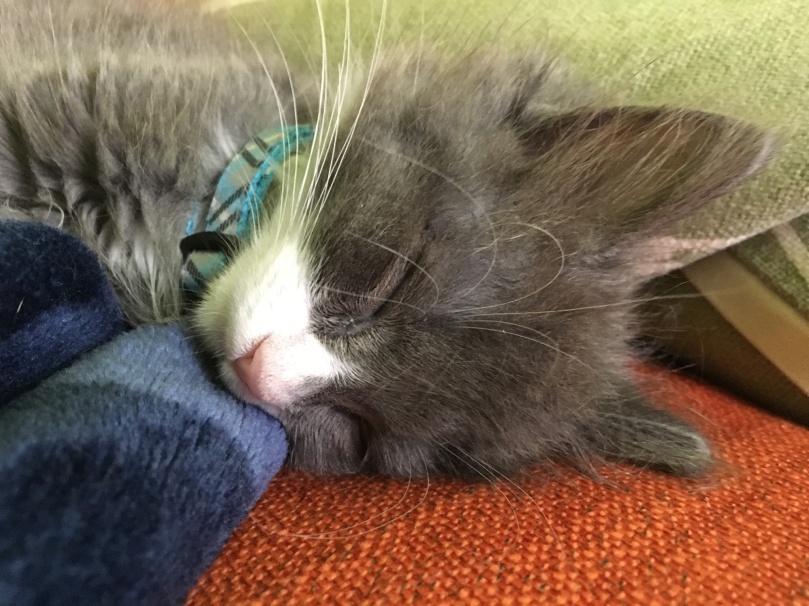