A couple months ago, my mom drove to Florida with the bubbies. She asked for my advice on how best to do it, since I’ve driven to Florida with kittens before, and to Tennessee with an adult cat (I’m located outside DC).

If you’re going to fly, plan to have your vet take a look at kitty. Many airlines require a certificate to travel, as well as an updated rabies vaccination. Even if you’re driving, it’s not a bad idea if you want to stop by the vet before the trip.

For cats that stress out really badly during travel, another reason to visit is that your vet can prescribe a sedative. For my own travel experiences, I found that none of the cats I traveled with required it. Yes, there was some yeowling, but no one so stressed that they got sick or hurt themselves.

A product I recommended to my mom for the drive, and to anyone that finds their cat in a stressful situation, was the calming collar. It is a lavender scented collar with pheromones. It’s similar to pheromone diffusers, which many use in their homes. There is also a spray that you can spritz in their carrier or on bedding. My vet uses the spray on blankets in the exam rooms for their feline patients.

I personally prefer the collar, because the diffuser requires the cat to be in that room, while the collar stays with them wherever they go. It’s useful not only for the drive, but also when you reach your destination, if it’s somewhere unfamiliar to the cats.

However, you know the cat best, so use your judgement.

If you’re in for a long trip, try to avoid feeding your cat beforehand. I know it feels mean, but cats will do just fine without food for a day. Even if you were to put food in their carrier, they might be too nervous to eat, and you could wind up with food strewn across the carrier, leading to possible mess you don’t want to deal with.

The exception to this is kittens; kittens have to regularly eat. When I traveled with kittens, they were being bottle fed formula. We made stops every 3-4 hours so that I could feed them. 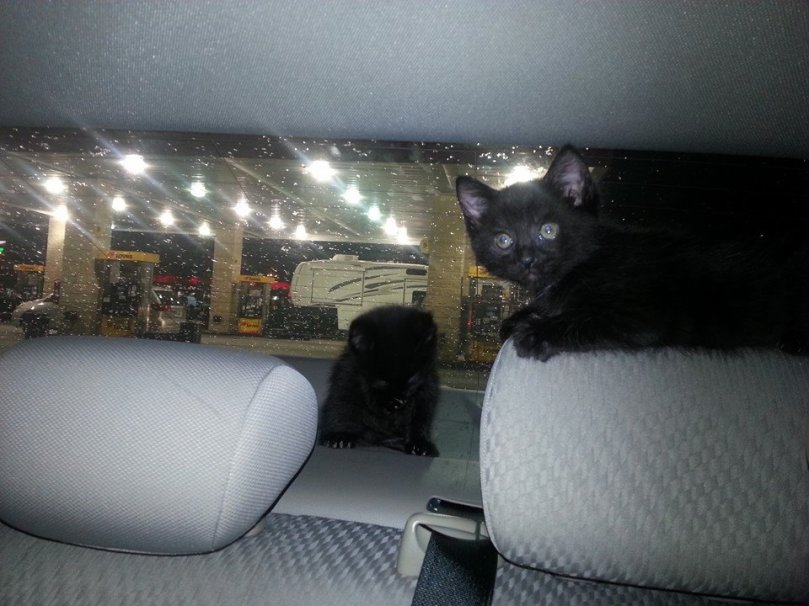 Sonic and Shadow were 6 weeks old when I drove from DC to Florida with my brother. We let them roam around the car while taking a break at a gas station.

If the trip will be longer than a couple hours, it doesn’t hurt to have a litterbox in the carrier. My mom bought large dog-sized carriers so that small litterboxes would fit. I’ve also seen foster transport organizations that will use the cardboard trays that canned wet food cases come in. For kittens, I’d say definitely have a litterbox, since they won’t be as capable of holding it, and you may have to feed them on the trip.

I’ll typically keep plastic gloves and some plastic bags on hand. If it makes you feel better (it made my mom feel better anyway), grab some rag towels/blankets and spread them out on your backseat underneath the carriers, too. When driving to Florida with kittens, we’d stop when we smelled poop, bag it, and toss it at a rest stop.

I don’t recommend letting an adult cat out of the carrier for any reason at all. They’re likely to hide somewhere in the car, like under the seats, where it’ll be hard to find them. For kittens, it will depend on if you need to feed them. For cats or kittens, NEVER let them out when the car is in motion, or if a door is open. You don’t want any one to bolt out of the car or crawl under the gas/brake pedals.

I have yet to travel somewhere requiring an overnight stay somewhere. When we drove to Florida there were 2 of us, so we drove 24 hours only stopping for food and gas. Few hotels allow pets, so consider maybe researching hotels along your route that allow pets ahead of time. Stopping at the Florida State Line to commemorate Sonic and Knuckle’s arrival to the state!

Something to bear in mind when traveling with cats is not to stress out too much about it before or during. A stressed cat won’t feel better during the drive if it can sense that you’re stressed out, too. They’ll meow and show their unhappiness about their situation; don’t panic, and talk soothingly to them and let them know it’s okay.