The babies are now 7 weeks old.

For the last three weeks, they’ve mastered using the litterbox on their own. Mom usually shows babies how to bury their waste in the box. These kittens are so smart; Havarti figured it out on his own, and Brie followed.

Since I started a new job two weeks ago, we had to get them on board with solid food. They understood the idea of it, but like human babies, they really preferred the nipple. Once we no longer gave them the option, they were happily eating wet food.

Both cats now eat in the morning alongside the adult kitties, and then are allowed to play in the the house instead of in a pen. When they need to potty, they return to their cage where the little box is. They have a mid day meal, and eat dinner with our cats. They inhale their food; they weigh over a pound each.

Sarah is amused by the kittens. She’ll occasionally stalk them and play with them. Most of the time, the kittens happily brawl with each other and ignore the adult cats around. 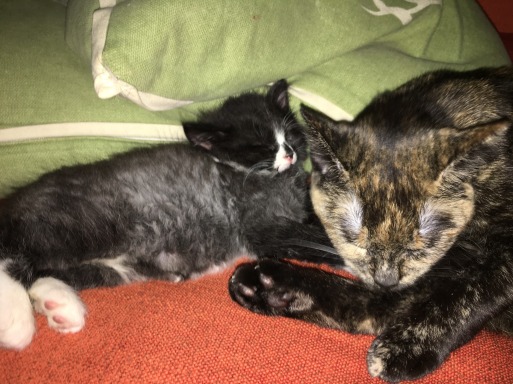 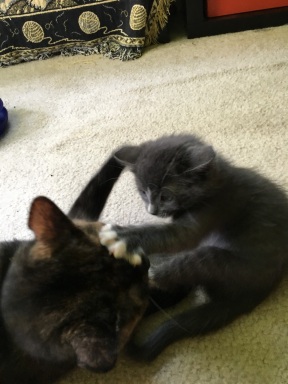