Mom was brought into a high kill shelter in NC while pregnant. She gave birth to 4 babies while there. The shelter was going to euthanize all of them, but someone reached out to us and was able to pull them for us.  They were flown up from NC to here while I was at cat camp, and I picked them up from a fellow volunteer when I returned.

Mom is a teeny little thing, probably only a year old herself. I’m not sure if she used to be someone’s cat, because she’s absolutely sweet to people. The vet staff began calling her mama frost (no idea why), but mama frost she is. 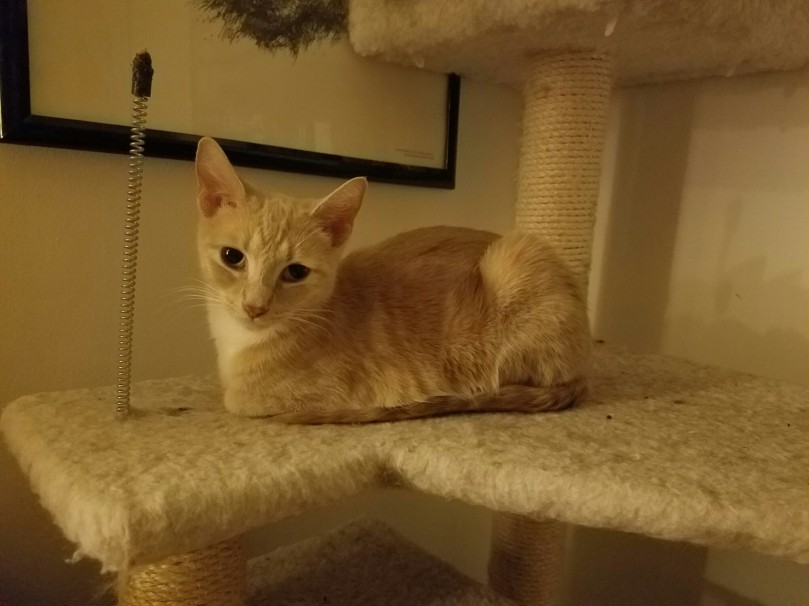 She’s such a good mama, but a picky eater. Some times she’ll scarf down her food, other times sniff and walk away. She definitely wants fresh food, nothing that has been sitting in the bowl for awhile.

She also appears to be a social eater, as she’s more willing to have a snack if someone is in the room with her. My husband sacrificed the comfort of his back and slept on the floor of our cat room their first night here. Men and cats ♡

Like with other litters we’ve raised, we usually weigh the babies twice a day to ensure they’re gaining weight. It’s so much easier with mama, than to bottle feed orphans every few hours. However,  we noticed that the babies weren’t gaining weight.

Worried that it had to do with mom not regularly eating enough, we’ve been putting just about any food in front of her that we hope she’ll eat. I’ll bring homework into the room, so that I can spend time with her and hopefully encourage her to eat.

The babies are 22 days old. Their weight is more up and down than I’d like, so I’ve begun supplemental bottle feedings 2-3 times a day. No one kitten is flailing, so either they get to the dinner table too late, or some of mom’s nipples may bring drying up. The extra formula seems to be helping ensure they gain a little weight.

There are 3 girls and 1 boy. I decided to name them after Tamora Pierce’s Circle of Magic characters. 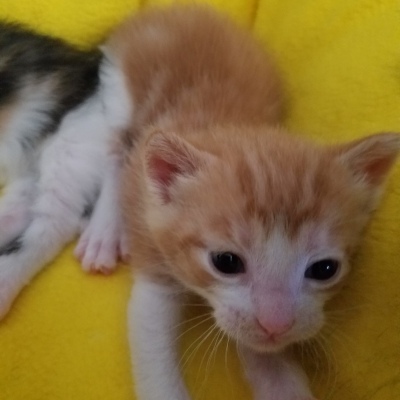 Despite their up and down weight, the kittens are beautiful and healthy. Mama keeps them nice and clean. Their eyes are full and bright, and they are already so full of energy. When we first brought them home, they mostly kept to a bed lined with a heating pad and blankets, but now they’re ready to follow Mama Frost or us out of the bed to chase us down for attention. They learned quickly that they can get food from us in addition to Mama, so they’ll yell when we enter the room. They have no issues climbing over one another to get to my lap for the bottle.

I like to start socialization early. My husband and I hosted a pot luck over the weekend, where several other couples visited and said hello to Mama Frost and the babies. Not to be forgotten, a few visitors have commented that if they could bring one home, it’d be Mama Frost. She’s been affectionate and friendly to visitors, usually sitting up on the tree or near the window to supervise human/baby interactions. Mama doesn’t seem to have any issues with strangers holding her babies. I’ve had mama cats that were fiercely protective anytime their baby would begin screaming. Meanwhile, friends were in and out of the cat room, bringing kittens to the living room area with them and having a million photos taken of them.

These are the first new fosters we’ve had since officially adopting Manny and Clue, so I wasn’t entirely sure how they’d react, particularly Clue. As usual, my cats are curious about the door to the cat room being closed, and jealous that Mama gets 2 types of food around the clock. At any given time we’ll find at least 1 cat sitting in the hallway outside of the room, wondering who’s making meep noises behind the door / what food is in there.

So far, Manny has several times walked right in and sniffed the babies without a care. Mama isn’t used to my cats though, so she’s been warning him to keep his distance. Clue met Mama tonight when Mama decided to wander out of her room and across the hall. She found herself unable to walk back to the cat room when Clue and Rook were watching her. They weren’t doing anything besides staring, but nonetheless I picked Mama up and carried her back to her babies.

We will continue to monitor everyone’s weights, and stay on top of ensuring that Mama and babies all eat enough. 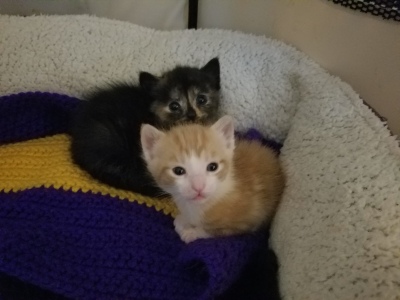