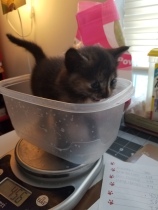 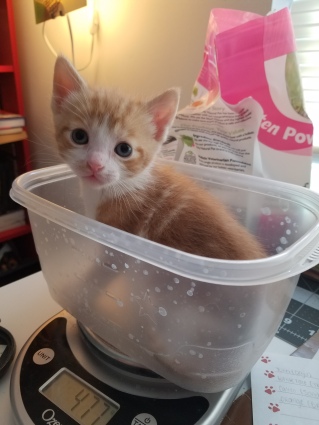 They are by far one of the easiest litters I’ve ever raised. A big part of it has to do with having Mama Frost doing most of the heavy lifting. Although it was bumpy in the beginning for her appetite, Mama Frost’s appetite kicked in, and the milk was flowing for the babies.

Once their teeth began coming in, I mixed Wellness canned food with water to try to feed them slurry. This can usually be a long process, where you’ll mix in baby formula, shove their noses in it, dab some on their tongues, etc.

I remember dabbing some watery food on Briar’s tongue, and like a lightbulb going off, he started crying for more. The way he bit my finger for the food (hard I may add), I was pretty sure Mama Frost wasn’t going to let them nurse from her much longer.

Tris, my ever smart kitten, went straight from eating the mix off my finger to immediately poking her nose into the bowl.

Litterbox training was equally a breeze. Once the kittens have better control of their bowel movements, they might begin pooping and peeing wherever. Tris informed me when the kittens were ready to begin litterbox training, because she walked just outside of Mama Frost’s box, yelled at me, and began peeing.

I recommend two things during litterbox training process: 1) don’t do it on carpet. your carpet will thank you for this. 2) have plenty of rags at the ready, and be prepared to do a LOT of laundry to bleach and clean those rags.

Although they couldn’t yet fit in the regular sized litterbox, they knew they wanted to go near where Mama did her business. We spent a week with smaller cardboard litter boxes around the room and towels underneath in case they missed. I strongly recommend Litter Attract, which has scents that make a cat want to go wherever it’s sprinkled. We used it the first few times we were changing the litterboxes for the kittens, but this particular group didn’t need it as much as others in the past.

There are inevitably accidents while potty training kittens. When they go on the floor instead of in the box, rather than throwing the poop away, place it in the litterbox. If you can, put a litterbox near where they pooped. That way when they have to go again, they’ll smell the poop in the box and want to go wherever it’s located instead.

It helps that when these guys need to use the bathroom, they start crying as though they’re announcing to the world “hey! hey everyone! I have to pottttttty!” so even if they’re nowhere near the box, Dwight or I can pick them up and put them in the box. Once again, my smart girl Tris was the first one to crawl into the regular litter box that Mama Frost was using, and begin using it as well 🙂

The kittens so far have been dewormed twice, and received their first FVRCP vaccinations this past Tuesday. We spent the last two weeks opening the door to their room so that they could explore outside of the room. Mama Frost was obviously getting fed up with their bursts of energy, because everytime we opened the door she’d bolt out and head for the hallway. My own cats were really curious to get inside (and eat the leftover kitten food). Mama Frost had some issues with this in the beginning, but as she kept bolting out of the room for some alone time, she stopped caring about leaving her babies alone with my guys.

Manny has been ecstatic to have new friends. He plays a little rough sometimes, so I’ll have to pull him away. As they get bigger, their sass grows too. Despite his larger size, Sandry and Daja will put up a decent fight.

Clue took a little longer to get over the babies. She spent weeks grumbling anytime they headed in her direction, but today even she was happily playing with them. 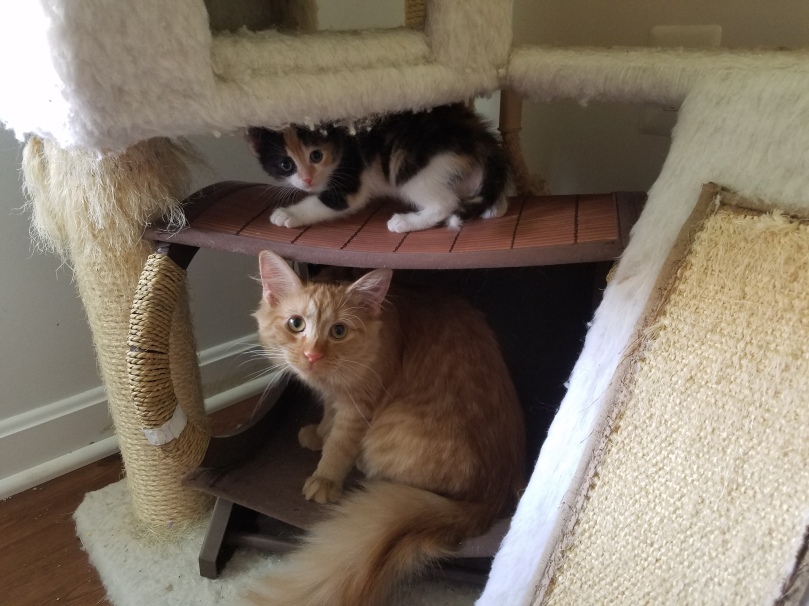 The kittens have been re-situated in the dining room/living room area of the condo. They seem to have mastered the litterbox, and only need to be put away when it’s food time, otherwise my cats and Mama Frost will devour all of their food. These guys are loving all of the different heights available in the house from the couches to the cat trees.

Even more so, they don’t mind having cuddle sessions with humans. There has been more than one occasion where my husband has lounged on the couch and found himself covered in kittens of varying ages.

Mama Frost, who was far too skinny when we first got her, is filling out great. She filled out so well that at her last vet checkup, they weren’t sure if she was pregnant again. Fat chance, unless she was pregnant when we got her (I did not know that she could become pregnant again while still nursing her current litter. Wow). They did a sonogram just to be sure. False alarm!

She’s still a tiny little thing. Now that she’s interacting daily with Manny and Clue, I’m realizing that it’s because she’s still a kitten herself. She can’t be but a few months older than Clue. Yet another reason why spaying animals is so important: babies having babies. Mama Frost isn’t nursing anymore and quite frankly doesn’t care a whole lot about her babies anymore. She plays (well, her and Manny sort of antagonize each other) and wanders our condo the way a kitten her age should. She’s scheduled to be spayed next week, and will be ready for adoption immediately after. She’ll make a wonderful cat for someone, and because she’s still young, someone will have a very sweet playful kitty for many many years.

When it rains, it pours. A fellow cat lady friend got word of three more moms with newborn kittens. Two of them are going to a different rescue, but it seems I may be getting another group soon….

One thought on “The Circle of Magic – Grows Up”